Iran begs to be destroyed by Israel 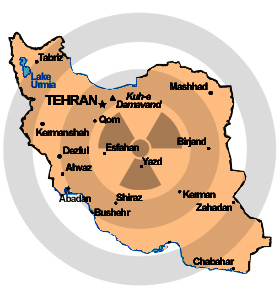 Iran declared Wednesday that it can destroy nearby U.S. military bases and strike Israel within minutes of an attack on the Islamic Republic, reflecting tensions over Iran's suspect nuclear program. (see Article below).  I really hope those crazy politicians in charge of the Iranian government in Tehran really do not believe this.  If they do, and they attack Israel, there will be nothing left of Iran except for orange glowing sand.  In the conditions created by President Barack Hussein Obama, the Israelis are starting to feel alienated.  Once that feeling becomes the basis of their decisions to attack, they will destroy millions of innocent people in Iran.

Iran threatens swift retaliation on US bases
FoxNews.com
TEHRAN, Iran –  Iran declared Wednesday that it can destroy nearby U.S. military bases and strike Israel within minutes of an attack on the Islamic Republic, reflecting tensions over Iran's suspect nuclear program.
The veiled threat came during a military drill that has included the firing of ballistic missiles. The elite Revolutionary Guards, conducting the war games in Iran's central desert, said that the missiles were aimed at mock-ups of foreign military bases.
Israel and the U.S. have hinted at the possibility of military strikes against Iran if sanctions and diplomacy do not rein in Iran's nuclear development program. The West suspects Iran may be aiming to build nuclear weapons. Iran insists its program is for peaceful purposes.
The semiofficial Fars news agency quoted Gen. Ami Ali Hajizadeh of the Revolutionary Guards as saying U.S. bases are in range of Iran's missiles and could be hit in retaliatory strikes. He referred to Israel as "occupied territories."
"Measures have been taken so that we could destroy all these bases in the early minutes of an attack," said Hajizadeh, chief of the Guards' air-space division.
Israeli officials refused to comment. There was no immediate comment from Washington.
Hajizadeh said the Guards also successfully test fired an anti-ship missile that could sink U.S. warships in the Gulf. Gen. Hajizadeh told state TV that the shore-to-sea ballistic missile, called "Persian Gulf," has a range of 180 miles.
State TV showed video of the launching of a white missile that hit a huge target in Gulf waters.
The U.S. reportedly bolstered its air and naval presence in the Persian Gulf. It is an effort to strengthen the U.S.'s position at the Strait of Hormuz, which is a key world oil route Iran has threatened to block amid tightening sanctions over its nuclear program, the New York Times reports.
The message to Iran is, ‘Don’t even think about it,’ ” one senior Defense Department official told the New York Times. “We’ll clear the mines. Don’t even think about sending your fast boats out to harass our vessels or commercial shipping. We’ll put them on the bottom of the gulf.”
The U.S. Navy's 5th Fleet is based in Bahrain, an island in the Gulf about 120 miles from Iran, well within range of Iranian missiles.
On Tuesday Iran said it launched a variety of missiles during the desert drill, including Shahab-3 missiles with a range of 1,200 miles that could reach Israel and southern Europe.
The Associated Press contributed to this report.
Read more: http://www.foxnews.com/world/2012/07/04/iran-threatens-swift-retaliation-on-us-bases/#ixzz1zhsViAiM
at 8:32 PM