It is often observed that many people's top ranking fear is not death but having to speak in public. The joke is that these people would rather be lying in the casket at the funeral than giving the eulogy. Public speaking for people who suffer from panic attacks or general anxiety often becomes a major source of worry weeks or even months before the speaking event is to occur.

These speaking engagements do not necessarily have to be the traditional "on a podium" events but can be as simple as an office meeting where the individual is expected to express an opinion or give verbal feedback. The fear of public speaking and panic attacks in this case centers on having an attack while speaking. The individual fears being incapacitated by the anxiety and hence unable to complete what he or she is saying. The person imagines fleeing the spotlight and having to make all kinds of excuses later for their undignified departure out the office window…

This differs slightly from the majority of people who fear public speaking because their fear tends to revolve around going blank while speaking or feeling uncomfortable under the spotlight of their peers. The jitters or nerves of speaking in public are of course a problem for this group as well, but they are unfamiliar with that debilitating threat which is the panic attack, as they most likely have not experienced one before.

So how should a person with an anxiety issue tackle public speaking?

Stage one is accepting that all these bizarre and quite frankly unnerving sensations are not going to go away overnight. In fact, you are not even going to concern yourself with getting rid of them for your next talk. When they arrive during a speech/meeting, you are going to approach them in a new manner. What we need to do is build your confidence back to where it used to be before any of these sensations ever occurred. This time you will approach it in a unique, empowering manner, allowing you to feel your confidence again. It is said that most of the top speakers are riddled with anxiety before speaking, but they somehow use this nervousness to enhance their speech. I am going to show you exactly how to do this, although I know that right now if you suffer from public speaking and panic attacks you may find it difficult to believe you can ever overcome it.

My first point is this and it is important. The average healthy person can experience an extreme array of anxiety and very uncomfortable sensations while giving a speech and is in no danger of ever losing control, or even appearing slightly anxious to the audience. No matter how tough it gets, you will always finish your piece, even if at the outset it feels very uncomfortable to go on. You will not become incapacitated in any way.

The real breakthrough for if you suffer from public speaking and panic attacks happens when you fully believe that you are not in danger and that the sensations will pass.

"I realize you (the anxiety) hold no threat over me."

What keeps a panic attack coming again and again is the fear of the fear—the fear that the next one will really knock your socks off and you feel you were lucky to have made it past the last one unscathed. As they were so unnerving and scary, it is your confidence that has been damaged by previous anxiety episodes. Once you fully understand you are not under any threat, then you can have a new response to the anxiety as it arises while speaking. 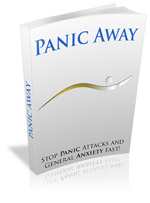 There is always a turning point when a person moves from general anxiety into a panic attack, and that happens with public speaking when you think to yourself:

"I won't be able to handle this in front of these people."

That split second of self-doubt leads to a rush of adrenaline, and the extreme anxiety arrives in a wave like format. If, however, when you feel the initial anxiety and you react with confidence that this is not a threat to you, you will move out of the anxiety rapidly. Using this new approach is a powerful ally because it means it is okay to feel scared and feel the anxiety when speaking–that is fine; you are going to feel it and move with and through the sensations in your body and out the other side. Because he or she is feeling very anxious, often before the talk has begun, that person may feel they have already let themselves down. Now, you can relax on that point. It is perfectly natural to feel the anxiety. Take for example the worst of the sensations you have ever experienced in this situation—be it general unease to loss of breath. You will have an initial automatic reaction that says:

"Danger–I'm going to have an episode of anxiety here and I really can't afford that to happen."

At this point most people react to that idea and confirm it must be true because of all of the unusual feelings they are experiencing. This is where your thinking can lead you down a train of thought that creates a cycle of anxiety that produces a negative impact on your overall presenting skills.

So let that initial "oh dear, not now" thought pass by, and follow it up immediately with the attitude of:

"There you are–I've been wondering when you would arrive. I've been expecting you to show up—by the way, I am not in the least threatened by any of the strange sensations you are creating—I am completely safe here."

The key to controlling your fear of public speaking and panic attacks is that instead of pushing the emotional energy and excitement down into your stomach, you are moving out through it. Your body is in a slightly excited state, exactly as it should be while giving a speech, so release that energy in your self-expression. Push it out through your presentation not down into your stomach. You push it out by expressing yourself more forcefully. In this way you turn the anxiety to your advantage by using it to deliver a speech where you come across more alive, energetic and in the present moment. When you notice the anxiety drop as it does when you willingly move into it. Fire a quick thought off when you get a momentary break (as I am sure you have between pieces), asking it for "more." You want more of its intense feelings as you are interested in them and are absolutely not threatened by them.

It seems like a lot of things to be thinking about while talking to a group of people, but it is not really. You'd be amazed how many different non-related thoughts you can have while speaking. This approach is about adopting a new attitude of confidence to what you might have deemed a serious threat up until now. This tactic will truly help you with fear of public speaking and panic attacks you have associated with them.

If your predominant fear of the speaking engagement is driven by a feeling of being trapped, then I would suggest factoring in some mental releases that can be prepared before the event. For example, some meetings/speeches allow for you to turn the attention back to the room to get feedback etc. from the group.

If possible, you might want to prepare such opportunities in your own mind before the engagements. This is not to say you have to ever use them, but people in this situation often remark that just having small opportunities where attention can be diverted for the briefest of moments can make the task seem less daunting. It my even be something as simple as having people introduce themselves or opening the floor to questions. I realize these diversions are not always possible and depend on the situation, but anything you can factor in that makes you feel less trapped or under the spotlight is worth the effort and can help alleviate fear of public speaking and panic attacks.